Two AC inputs with integrated transfer switch
The Quattro can be connected to two independent AC sources, for example shore-side power and a generator, or two generators. The Quattro will automatically connect to the active source.

Two AC Outputs
The main output has no-break functionality. The Quattro takes over the supply to the connected loads in the event of a grid failure or when shore/generator power is disconnected. This happens so fast (less than 20 milliseconds) that computers and other electronic equipment will continue to operate without disruption. The second output is live only when AC is available on one of the inputs of the Quattro. Loads that should not discharge the battery, like a water heater for example, can be connected to this output.

Virtually unlimited power thanks to parallel operation
Up to 10 Quattro units can operate in parallel. Ten units 48/10000/140, for example, will provide 90kW / 100kVA output power and 1400 Amps charging capacity.

Three phase capability
Three units can be configured for three-phase output. But thats not all: up to 10 sets of three units can be parallel connected to provide 270kW / 300kVA inverter power and more than 4000A charging capacity.

PowerControl – Dealing with limited generator, shore side or grid power
The Quattro is a very powerful battery charger. It will therefore draw a lot of current from the generator or shore side supply (16A per 5kVA Quattro at 230VAC). A current limit can be set on each AC input. The Quattro will then take account of other AC loads and use whatever is spare for charging, thus preventing the generator or shore supply from being overloaded.

PowerAssist – Boosting the capacity of shore or generator power
This feature takes the principle of PowerControl to a further dimension allowing the Quattro to supplement the capacity of the alternative source. Where peak power is so often required only for a limited period, the Quattro will make sure that insufficient shore or generator power is immediately compensated for by power from the battery. When the load reduces, the spare power is used to recharge the battery.

Solar energy: AC power available even during a grid failure
The Quattro can be used in off grid as well as grid connected PV and other alternative energy systems.

System configuring has never been easier
After installation, the Quattro is ready to go. If settings have to be changed, this can be done in a matter of minutes with a new DIP switch setting procedure. Even parallel and 3-phase operation can be programmed with DIP switches: no computer needed! Alternatively, VE.Net can be used instead of the DIP switches. And sophisticated software (VE.Bus Quick Configure and VE.Bus System Configurator) is available to configure several new, advanced, features. 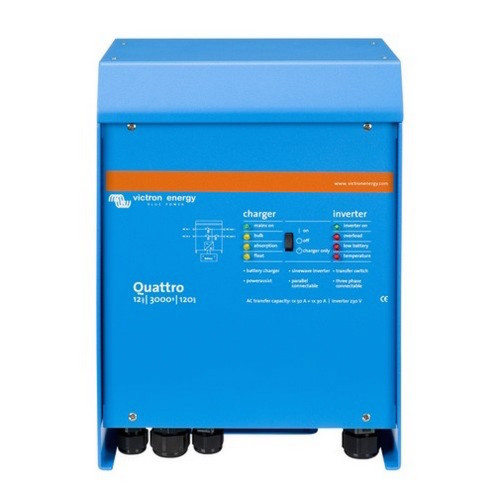